Correctly calculating ARV (After Repair Value) is no cakewalk. The market changes daily – by city, neighborhood, and street. To be a great ARV calculator, you must be equal parts historian, detective, and fortune teller. Perhaps Zen master, too, because the stakes are high: calculating ARV incorrectly can literally cost you hundreds of thousands of dollars.

ARV, by its nature, is a moving target, and most fix-and-flippers never hit a bullseye. Yet, Michael Blatney, Residential Capital Partners’ dedicated Portfolio Underwriting Manager, is one of the industry’s sharpest shooters. Why? Because he’s been flipping houses since before there was a name for it – and more or less discovered the concept of an ARV.

Make your next property walkthrough a breeze.

So, if you want to turn a profit flipping houses in 2021, when the market is tight and inventory is low, keep reading and heed his advice.

This is Michael Blatney’s first job in finance, despite graduating with his BA in Banking and Finance from the University of North Texas in 1975.

Blatney comes from a long line of builders. His father, uncles and even grandfather made a good living building custom homes. Blatney graduated college during a tough economy, with few unappealing positions available. It didn’t take long before Michael’s father persuaded him to give the family business in building a try.

Blatney recalls, “[My father] drove me around to look at the inventory, gave me his keys, looked at his watch and said ‘Ok, you’re in charge. Your mom and I are catching a plane to Vegas at 2:30’. And that was it. It was the same way he taught me to swim—he stopped the boat in the middle of a lake and threw me over. He was a John Wayne kinda guy.”

Blatney sold two houses while his parents were out of town… and continued to sell numerous houses thereafter. He grew into a tremendously successful broker in the years that followed… but that was just the beginning.

“You can’t tell the market- the market tells you.” – Michael Blatney

Pre-internet, brokers could only find properties by driving for dollars or scouring the pages of hardcopy MLS directories. While other investors waited two weeks for the directories to be published, Blatney found a shortcut. And as we know, in this industry, speed is everything.

Blatney was one of the first brokers to beta-test web-based MLS systems, which gave him instant access to live, local MLS data. At the time, the only way to remotely tap into the local MLS mainframe was through a T1 terminal plugged into a phoneline.

Blatney’s first flip popped up on his T1 terminal: a foreclosure. He scooped it up, fast, and used the same contractors from his building business to fix it up. To his surprise, he made a larger profit from this “ugly” house than he’d made on any of his beautiful custom homes.

The ability to recognize potential paid off.

“I had sellers cry at closing, because they’re just so happy to be rid of that property.”-Michael Blatney

Blatney shifted his focus from building to flipping after making a keen observation about managing market risk: “[When building custom homes] It may be 10 months before you see a check. Sometimes a year. In that timeframe, a lot can happen. The market can go down, or up. In this business, you can rehab [a house] sometimes in two or three weeks.”

Related: The beginner’s guide to investing in rental properties.

Creating a New Industry With HomeVestors

Blatney wasn’t the only one using live MLS data to put “houses in the bank”. In the mid-80’s, he teamed up with Ken D’Angelo to purchase properties together.

To give you some context: at the time, this was considered unusual. Blatney’s first fix-and-flips were often purchased from people who inherited houses in poor condition that they didn’t have the time or money to repair. Blatney recalls, “At the time, people didn’t even know selling a house as-is was an option. I had sellers cry at closing, because they’re just so happy to be rid of that property.”

Ken and Blatney found a market niche: lifting the burden of fixing and selling “ugly” homes.

D’Angelo officially founded the industry’s first fix-and-flip franchise operation, HomeVestors, in 1996 with the memorable slogan “We Buy Ugly Houses”. Blatney hopped on board as HomeVestors’ sixth franchisee, and by 2003, moved into a corporate position, responsible for building the support and education system for franchisees.

Blatney reminisces, “Way back in 2003, we didn’t have all of this information and technology at our fingertips. So I traveled a lot. I would fly across the country, look at a house, walk into a real estate office, introduce myself, and talk them into letting me use their MLS system.”

The Birth of ARV

When Blatney first began putting “houses in the bank”, there was no such thing as ARV. Appraisers used historic data to determine the value of a home in its current state only – not its future, fixed-up value.

This is when Blatney’s experience as a builder came in handy. He was able to accurately gage the cost of renovations, forecast the market, and predict the home’s future value. In a nutshell: he configured the formula for ARV.

Even today most appraisers rely squarely on historical data, without considering the future, or truly understanding that specific area or property. Blatney reports, “If you ask 10 different appraisers for appraisals, you’ll get 10 different numbers.”

Why ARV is Mission Critical To Maximizing Profit

Blatney has a few pieces of advice for investors, “There are things I believe in strongly. One of them is meeting buyer expectation. Not exceeding it, and not falling short. You have to really know your house and your market hit that sweet spot.

Certain investors will have a standard package when it comes to rehabbing a house. Same colors, same quality, same paint choices, cabinets. This can be a big mistake. It’s so important to know the price of new cabinets and counter tops—not in general, but specific to that house. You have to consider the market in that neighborhood to make those calls. You can’t tell the market- the market tells you.”

Residential Capital Partners hired Blatney earlier this month. As Portfolio Underwriting Manager, Blatney will be the mastermind determining the ARV for investors—forecasting the value of homes based on market conditions and repair costs on property applications to give investors an appropriate line of credit.

This will be Blatney’s first time working for a financial institution, 35 years after receiving his diploma. In his words, “I’m finally doing what I wanted to do in 1975. I feel like I’ve been training a lifetime to do this. It seems linear when I look back now, but at the time it felt like zig zags.

As a broker, as a builder, that background helps me help you to sell. I’ll coach [investors] on what they need to meet buyer expectation in that neighborhood, with that property.

Because, unfortunately, there’s no broad brush you can paint with across the country. No two markets are the same. And then you start breaking it down by neighborhood— they’re all different!”

He’s reviewing loans and collateral across the US, coast to coast, and says “It takes a little longer to do, to research other markets, but the information is there, and it’s always well worth the time and effort.”

Why Blatney Recommends a Private Lender

You’ve probably noticed: housing inventory is tight at the moment. Many investors have concerns about the economic fluctuations caused by the COVID-19 pandemic and policy changes from Capitol Hill. Blatney’s advice is to stick with a privately funded lender.

He reminds investors, “Real estate is always up or down. It doesn’t flatline very long. It’s all regulated by supply and demand, and right now, the demand is great.

“Go ahead and get your foot in the door now with us because we’ll be there for you when the market turns – and that’s when investors get wealthy!” – Michael Blatney

The problem with a market like we’re in now is getting access cash to purchase the houses you do find. We had similar market conditions in 1988. I remember walking into a bank for a loan to purchase property. They told me they’d sell me a house, but not give me cash.”

Residential Capital Partners is a privately funded hard money lender, a rarity in the house-flipping lender community. After the COVID-19 pandemic hit the United States in March of 2020, many lenders shuttered their doors and sold their notes to big banks, or stopped accepting property applications altogether. Even if a lender survived and continued business as usual, investors were surprised to find their lenders’ rates and terms were suddenly changing.

Residential Capital Partners isn’t subject to Wall Street, so our doors stayed open. Not only that, but our terms didn’t change. At all.

Blatney reports, “I strongly recommend investors to use [Residential Capital Partners] because, as a privately owned lender, we’re going to be there, even on a down swing, when bankers will take away your line of credit. Go ahead and get your foot in the door now with us because we’ll be there for you when the market turns – and that’s when investors get wealthy!”

The Challenges & Benefits of Investing Today

Much has changed since Blatney found his first foreclosure on a T1 terminal. HomesVestors’ “We Buy Ugly Houses” signs dot our city streets. There are numerous fix-and-flip blogs, webinars, and even HGTV shows. It’s easier than ever to find and purchase properties.

On the other hand, competition is increasingly cutthroat. The market is volatile. Inventory is tough to find.

Some might even call this market “ugly”… while investors like you and Michael Blatney see the opportunity of a lifetime.

Make your next property walkthrough a breeze. 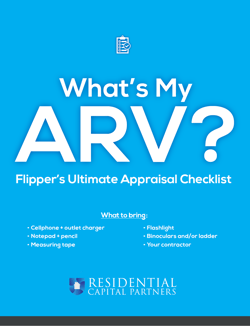 Residential Capital Partners is a financing company that specializes in providing hard money loans for real estate flips and real estate investment properties. As one of the nation’s leading private hard money lenders, we’ve provided hard money funding and short-term mortgage loans for more than 1,000 real estate investors across the United States. Our approach and our terms are straight-forward: We offer 100% funding up to 70% of ARV with no money down.